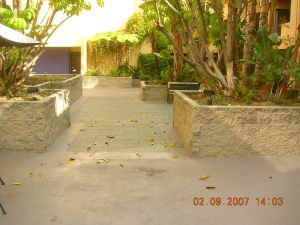 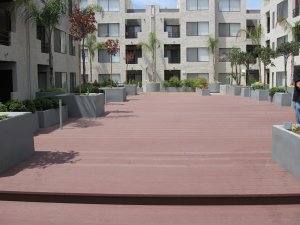 Having started this job way back in November of 2007, West Coast Waterproofing Services of Paramount has just completed the final phase of the job, completing the application of the finish to the public courtyard at 100 6th Street in Long Beach.

The final value of the job approached $250,000.00 in waterproofing work, according to Bill Leys, the project manager for West Coast Waterproofing.

Desert Crete decking from Hill Brothers Desert Brand Decking & Flooring Division was installed on 139 decks, which were also rebuilt with new plywood and framing due to prior leaks. Sloping, crickets and scuppers will assure that rain water drains properly, and the Desert Crete system will provide the owners of the building, UDR (formerly United Dominion Realty Trust)with a low maintenance easy to care for surface that remains resilient to use and abuse from residents.

The biggest part of the project though, and the most prominent, is the 14,000 square foot Courtyard. The old concrete planters in the courtyard with overgrown landscaping were removed, then West Coast Waterproofing removed the old urethane coatings from the entire courtyard, scarifying, scraping and bead blasting the surface down to the original concrete substrate, then a Hill Brothers Desert Brand decking system, Desert Flex.

After prepping the surface, a leveling/bond coat was applied, and then the task of applying polymeric waterproofing was performed. Staffing levels were high, as the weather in February/March was fickle and protecting the parking garage and storage below was vital. The 14,000 square feet was successfully waterproofed in 2 days, with the screed coat placed on days 3, 4 & 5. Sloping in many areas was performed to improve drainage issues that the Courtyard suffered from.

A new raised deck system was built over the courtyard in the main area, with new modern planters and landscape plants. ADA compliant ramps and sets of stairs provide access to the new common area.

Hill Brothers Desert Brand division worked closely with us to ensure that the system tied into the drains and that the Bison Brand deck supports were compatible with our system.

Along with the decks and courtyard, West Coast Waterproofing provided all of the planter waterproofing, applying Tremco 250GC to apx 3000 square feet of planters on the exterior of the building.

With all new modernized apartments, a fresh look on the building and Desert Brand decking, the building is a place we are proud of working at with the General Contractor, Cal Building & Maintenance (CBMI) of Hawthorne.

Pine Avenue marks the 2nd major rehab job with CBMI, West Coast Waterproofing having redone the decks on a project of their last year in Marina Del Rey on Northstar.