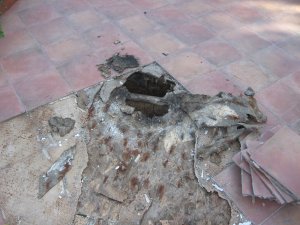 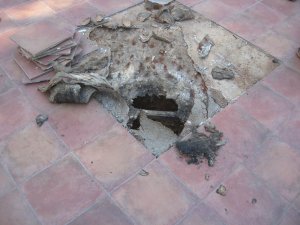 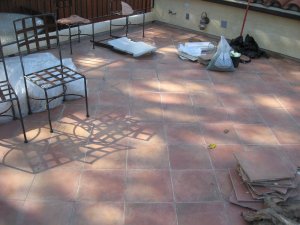 In the world of waterproofing a deck for the application of tile, there are a few things one should or should not do…
1.)-Do not Cheap out on the installation costs of your waterproofing.
2.) Do not Install unapproved or unevaluated coatings.
3.) Do check the applicators status and ensure their competency to correctly install waterproofing for tile.
4.) Do call Central Coast Waterproofing at 805-801-2380 for a proper and thorough job…

I was down in Santa Barbara at an expensive home up in the hills last week, having received a call from an owner who found our DeckExpert.com website.

They said to me that they had a guy a couple years ago, a Tufflex applicator, install waterproofing for their new tile deck. Now they are suffering from water intrusion into their garage …the deck had been partly dismantled to inspect and would I be interested in giving a bid?

I was on my way…here’s the pictures of the deck…with their nice tile torn off.
Turns out that the applicator is out of business, what a surprise, but he wanted to “help” and offered a local applicator/contractor that did Tufflex to redo the job. The Tufflex was installed over OSB (tsk tsk) and then metal lath was stapled down and the tufflex laid into the lath. Only the applicator must of been (Pick one or all)

Whichever you pick, you’d be correct. Failure to bury the lath caused this huge problem that will cost the owner 8-12k in repair costs, not including the tile work. The water on the deck seeped by the grout of the tile, down to the waterproofing, where it had no place to go…so it sat on the Tufflex and exposed metal lath. While sitting, there was this marvelous little chemical reaction going on between the metal lath and the water…RUST action.

Eventually the water made it’s way into the garage ceiling below, exposing finally the sins of it’s installer.