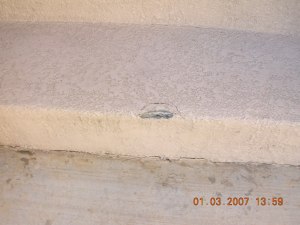 Minor damage on stairs noted in a report in 2007 turns into major dry-rot in the framing in 2011
I was recently involved with a portion of a construction defect case for a condo complex in Santa Maria. The portion I was involved with concerned decks and stairs that had waterproof coatings on them.
The company I had worked for many years before was being sued. I had sold the job originally and so was called upon to help out. They were being sued for about 1.5 million in damages.
The plaintiff's attorneys had found via their experts many “defects” that were caused by faulty work, in stucco, decks, plumbing etc. The developers insurer soon settled out for apx 3 million.
The subs were the only ones left to scavenge from for insurance money.
For our client, there was evidence found that showed the Association had caused an inspection/bid to be done for repairs/repainting of the decks and stairs in 2007, 4 years after being built. Other evidence showed that the buildings had been built “out of sequence”, stucco installed before decking, defects by other trades-a plumber had installed faulty drains and that a 3rd party inspector had missed defects when the place was built.
The deposition of the sub-contractor showed that the developer made bad decisions.
The original claim for 1.5 million was scaled back to less than a million. After months of back and forth the claim eventually settled for $150,000. The biggest factors? The letter from a waterproofing company telling the Association of problems with damage from wear n tear and owner caused problems. The decision by the BOD to not perform maintenance and defer it allowing components to deteriorate.
The attorneys probably should not have settled with the developer until after deposing the deck sub contractor and evaluating their case against the sub . It was only after they settled with the developer did they set their sights on what they probably felt were easier targets.
Lesson-Associations should maintain even if they are considering a construction defect action. Allowing components to rot while hoping for money that isn't coming because your attorney blew it isn't a good  maintenance or funding option.
News and information courtesy of DeckExpert.com, the voice for Division 7 Waterproof Decking.