Prior complaints by tenants about mushrooms growing out of balcony allegedly ignored.

Reporter Thomas Peele’s (@Thomas_Peele) latest article on the Berkeley deck tragedy reports that the families and victims of the deck collapse have filed a lawsuit alleging some of the defendants named in the suit knew of problems with the deck after it was built and the building occupied. Other defendants allegedly “deliberately ignored” the plans for the deck.

“BERKELEY — Tenants of a Berkeley apartment had complained to building managers for weeks that mushrooms were growing on a wooden balcony before it collapsed during a party in July, plummeting six people to their deaths, lawsuits filed Thursday allege.

But their complaints were ignored, survivors and families of the victims claim in a negligence lawsuit that alleges the building owners and construction company could have prevented the tragedy.”

The allegations, if proved true, would leave many of the named parties at risk of being exposed to millions of dollars in liability costs.

I’ll say it once again, decks must be built using best building practices and with the highest degree of skill and materials available, not the most cost effective, cheapest materials and labor. If successful, this lawsuit may just change the way builders hire sub-contractors-today the cheapest wins, the most responsible skilled contractor loses. It’s time for a change. 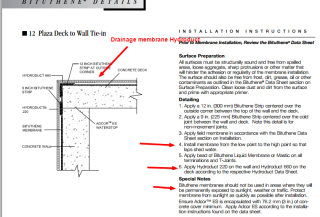 The six people that died and seven who were seriously injured in the balcony collapse on an apartment building on Kittridge St in Berkeley CA never should have died or been injured. That’s my opinion, based on the information and documents I’ve received and photograph’s I’ve reviewed.

Eventually a jury or a mediator will award the dead and injured money to compensate them. Who will pay and how much they will pay will be the only question.

From what my review and discussions with other experts have come up with, the wood cantilevered deck was framed out flat, despite the plans calling for a 2% slope on it. After being built, it was waterproofed using Grace 3000 bithuthene membrane, a peel and stick waterproofing sheet good.

After being waterproofed, it appears that sloping materials in the form of concrete backer board type materials were placed on top, then screwed down through the waterproofing membrane. Grace advertises that their membrane is “self healing” but also advises that any penetrations be patched. Near impossible to do in this type of situation. But someone probably thought hey it’s self sealing so no problem screwing through it.

Apparently no further waterproofing over the sloped materials was done.

Then a concrete deck was poured over this assembly. Water will leak through concrete. It’s permeable unless it’s waterproofed. Stucco was applied as the finish under the balcony. One design flaw with the stucco was that no vents were installed on the underside of the deck. 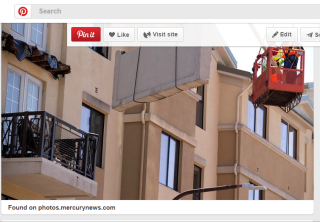 Clearly there are no vent strips on the underside of the stucco covered deck.

Now I want to be clear, the design of the waterproofing appears to have been a problem too. I’ve reviewed details of the waterproofing assembly and the architect appears to have left out on critical piece of the system assembly-subsurface drainage.
The Grace 3000, like nearly every Grace waterproofing product, requires a drain board assembly to be placed on top of the waterproofing membrane over a pre-sloped substrate. Without the ability to drain water out, concrete will hold the water against the waterproofing membrane, allowing it to sit, especially on a flat deck. The Grace system, if properly designed and assembled, should have worked for years and years without issue.
So a flat deck, with waterproofing on it without slope, allows water to sit on it under the concrete overburden. Theoretically this deck as it began to deteriorate. My question then becomes, were the decks at the property ever inspected by the management company or a building evaluation specialist? My reason for asking is I would think that some signs of distress may have been present and noticeable to an expert. I say this because experts inspected the other decks on this property and determined several were dangerous and were red-tagged. Therefore it’s reasonable to assume this deck, had it been inspected, could have been found to be dangerous before this tragedy happened.
The lawyers will figure it out, the insurance company will pay out and we as a industry in building and protecting occupants, must become better at our trades, in both design and assembly. Someone has to own their work and take pride in it and do it right.
We can’t afford cheap construction.
News and information courtesy of DeckExpert.com, the voice for Division 7 Waterproof Decking.