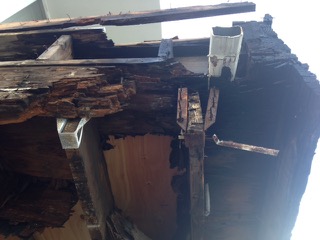 In a search today for something entirely unrelated to decks, I stumbled upon the news that a Homeowners Association in Diamond Bar CA had been red-tagged and the residents ordered to leave their homes because of deferred maintenance leading to structural concerns. The order to leave has been rescinded after the first engineers report declared the property and immediate hazard and recommended evacuating units was found to be lets say “over cautious”. There are 155 condos at the property on the first and second floors. The second floor units have balconies while first floor units have a patio.

Several structural engineers reports on the conditions found at The Village at Diamond Bar came to the conclusion that “while there are substantial deferred maintenance issues that should be addressed throughout the complex property, the condition does not create a widespread and immediate danger to the life or safety of all occupants of the individual units as previously recommended via a report by Khatri International, a structural engineer hired by the Diamond Bar Village Homeowner’s Association.“

Update, 2/18/22, Board of Professional Engineers has Opened A Complaint Against Raffi Abkarian

DeckExpert.com,  after investigation and information provided by anonymous sources has formed the opinion that HOA/condominium balcony inspection reports signed off by a “deck inspection” firm operating in the So Cal area may be invalid and fraudulent. The company is performing balcony inspections for condo and apartment complexes in the Southern California area and through their waterproofing company, is offering to fix any problems at exorbitant rates.

Rarely does a day go by without my Google alerts, “deck collapse” & “deck fire” sending me an email about another balcony collapsing somewhere or someone’s grill or fire pit on their deck was the cause of a major house fire.

Two weeks ago the headlines were about the Malibu balcony collapse, where 16 people fell to the rocks 15 feet below while at a house party on the coast. Fortunately no one died. This time. Six years ago, six students died and seven were seriously and permanently injured…broken backs, crushed lungs, featured bones, when the balcony they were standing on to take a picture for a birthday celebration suddenly collapsed.

END_OF_DOCUMENT_TOKEN_TO_BE_REPLACED

The balcony that collapsed in June of 2015 in Berkeley, killing 6 and severely injuring 7 other Irish students has been found, after analysis by forensic scientists,  to have been constructed improperly. As a result, the Contractors State License Board has filed through the Attorney General’s Office an accusation against Segue Construction, the general contractor.

The allegations are serious, not following plans without an architects approval will land you in hot water with CSLB.  It has also resulted in 6 dead people and 7 injured. The weight of that alone would crush me, yet these people running Segue are conscienceless snakes that sought to blame the victims. How do they look in a mirror?

The accusation lists out specifically the contractors failures, from not using pressure treated materials, to using OSB board where their project manual said it was specifically not acceptable, to failing to cover and protect the deck until it could be waterproofed to failing to waterproof it properly.

Read the accusation by clicking here.  Alternately you can read the specific allegations below. The accusation is a public document and the CSLB has posted it as a public service to help warn consumers, as they feel that Segue is a threat to the public. Segue is afforded due process and can defend against the accusation, including even if/when their license is suspended or revoked. Another case I’m familiar with has dragged on since October of 2013 and still proceeds today so justice may take a while here too.